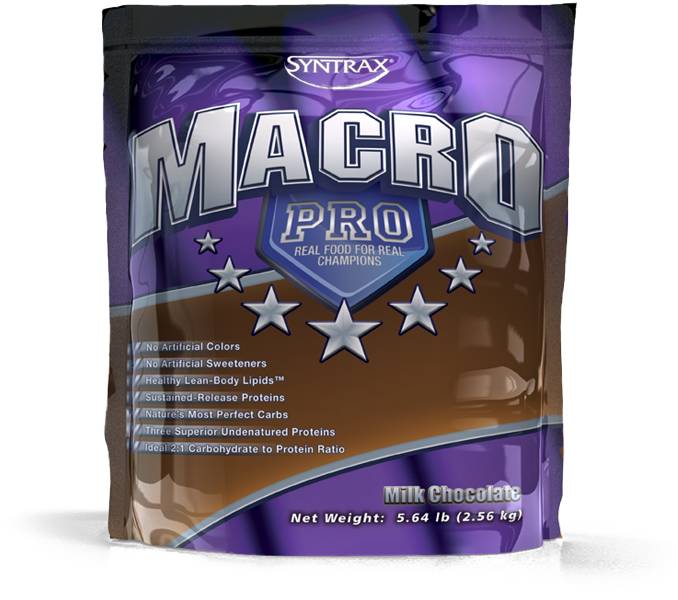 37g
Protein
74g
carbs
10g
fat
500
calories
no trans fat
sustained-release proteins
no artificial sweeteners
nature's most perfect carbs
healthy lean-body lipids
2:1 Carb to protein ratio
MacroPro™ is a convenient nutritional beverage that is engineered to perfectly replenish precious nutrients that are lost due to exertion, such as strenuous exercise. For good reason, MacroPro™ has been called the “perfect food” due to its high-quality ingredients and ideal fat:carbohydrate:protein ratio.

In a similar way, MacroPro™ contains only the most valuable proteins in human nutrition, such as undenatured whey protein, undenatured micellar casein and undenatured egg albumin. Not only are these proteins superior for total body recuperation and repair, but they “feed” the body continuously by acting in a time-released manner. Whey protein is considered a fast-acting protein, while egg albumin and micellar casein are considered medium and slow-acting proteins, respectively.

Finally, MacroPro™ contains no inferior fat-inducing carbohydrates, such as maltodextrin. Instead, only the best carbohydrate macronutrients are used, such as trehalose, palatinose and dehydrated cane juice. Together, these advanced nutrients provide a stable infusion of carbohydrates to bodily tissues and are perfect for both short and long-term replenishment of the body’s glycogen stores.

As can be seen, MacroPro™ is the ideal nutritional beverage for inducing optimal physical performance and recovery. This one product provides superior results, superior convenience and superior economics.